The Conscious Cup Campaign is an initiative founded by a group of concerned individuals who seek to reduce and eventually eliminate the use of disposable cups in Ireland.

The campaign hopes to increase the use of reusable cups, by encouraging cafes and other outlets to incentivise this through discounts and loyalty schemes. This will reduce waste going to landfill and littering our streets as most disposable cups are non-recyclable.

The Conscious Cup Campaign Committee started in 2016, along the way some invaluable members have departed due to work, family commitments and other meaningful projects. We would like to acknowledge that their input was paramount to the success of our campaign. They include among others Rachel Dempsey, Claudia Tormey, Elaine Butler and Timi Nicholson.

Now we have a committee of six who meet periodically using their individual strengths and talents to do the right thing. We have a Facebook Supporters page for people who wish to actively encourage Cafe’s to join and who organise events in their own locality or workplace. 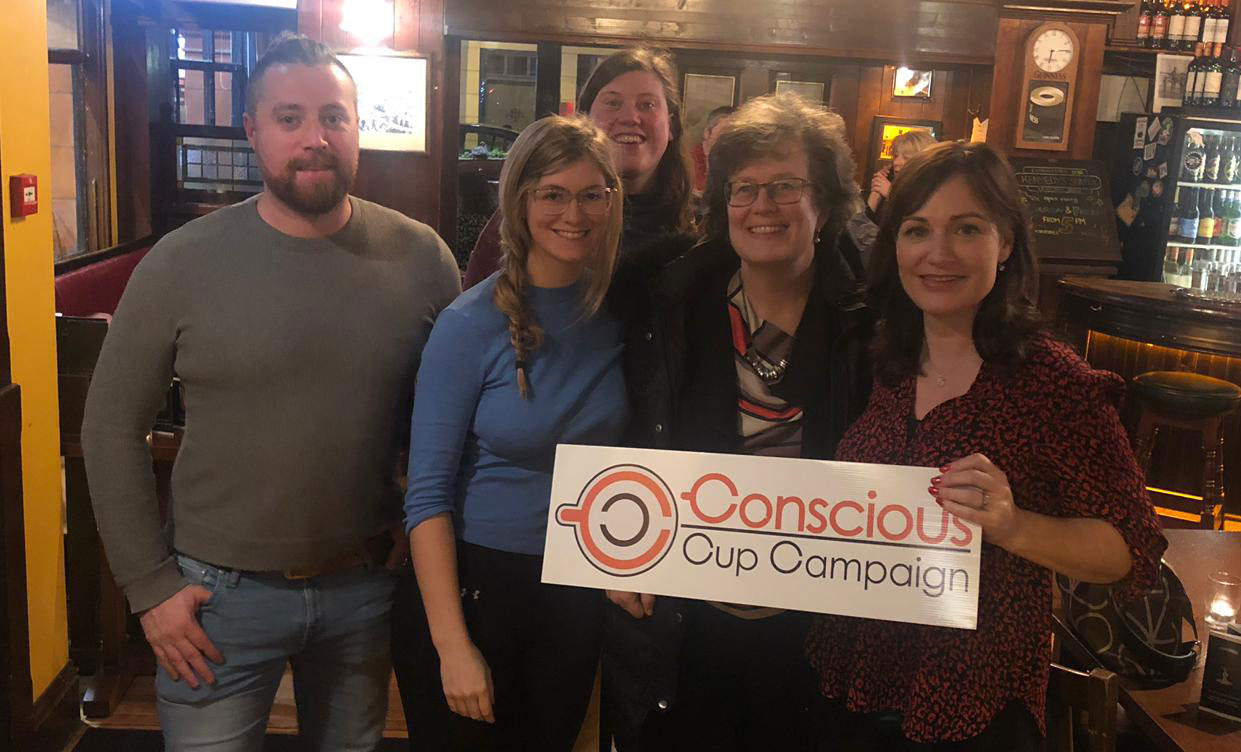 Coordinator of the Conscious Cup Campaign

Sorcha always had a keen interest in the environment, nature and social issues. She spent twenty-five years in Sales & Marketing mainly in business to business across various industries including print, packaging and healthcare.

Having had an illness in 2015 she had a wake-up call and finally decided that she wanted to take action and be part of the solution to creating a better environment for future generations. She joined the committee in 2016 as a volunteer and having been successful in acquiring funding she became the campaign coordinator in January 2017. She was also a Climate Ambassador during 2017, she lives in North Dublin with her husband, two girls and two cats and loves music.

Is the waste Prevention Officer for the Eastern Midlands Waste Region, so he is all too aware of problems single use items carry and is constantly working in the area of awareness and behavioural change. The EMWR have an initiative called Reuse Month and as part of Reuse Month 2016 Declan created a network of cafes who would offer customers an incentive when they brought their own cup. From carrying out this exercise successfully he knew there was an appetite from both the cafes and the customers so when he heard about the Conscious Cup Campaign he had to get involved.

Coordinator of VOICE, an environmental charity working extensively on waste issues. Mindy has had a huge interest in waste policy and waste prevention initiatives for over 25 years. She worked on Capitol Hill in Congress in the late ‘80s and early ‘90s on waste legislation. Since moving to Ireland in 1996, she has been involved in VOICE (Voice of Irish Concern for the Environment) in every capacity—from volunteer to board member to Chair and to Coordinator. In her tenure at VOICE, she has championed several public awareness and engagement initiatives, including Feeding the 5,000, Food Rescue, Food Waste Reduction workshops, a home economics food waste module, Zero Waste Cashel, Sick of Plastic Campaign and lastly the Recycling Ambassador Programme.

Mindy got involved in the Conscious Cup Campaign committee in her role as Coordinator of VOICE, but also as an individual interested in reducing her waste foodprint. Since discovering that disposable coffee cups are not recyclable, she has made it her mission to change the behaviour in her office environment (very successfully!) and amongst the public in general.

Deirdre Gavin works in informal education and discovered that coffee cups are not recyclable in Ireland. When on a project management training course shortly after, she decided that now armed with this shocking fact, she was going to do something about this problem. She joined a group in November 2016 that had already begun formulating ideas as to how to tackle this problem. Deirdre believes if you see a problem don't just sit around and watch it get worse, try and do something about it. The conscious cup campaign has gone from strength to strength and Deirdre is very proud of what the group as achieved so far. She feels empowered by observing others change their habits and behaviours. As far as she is concerned, there is no limit to what a group of people with a vision and hard work can do.

Orla Matthews is an environmentalist and coffee addict, she holds a primary degree in Art from WIT and is currently studying for an Honours Degree in Multimedia in DCU. She has worked in communications for over 15 years, but it was whilst travelling when she was younger that she first became aware of the importance of global conservation. Orla currently lives in North Kildare with her young son. Uncomfortable with the unnecessary waste and negative environmental impact of disposable nappies, she made the switch to cloth, eventually going on to manage communications for the Cloth Nappy Library and found Zero Waste Maynooth with several other mums. Recently Orla has adopted a more zero waste lifestyle, she advocates for the elimination of single-use plastic and a strong belief that everyone can make small changes in their lifestyle that makes a big difference to the planet.

Keith grew up immersed in nature on a small farm on the Wild Atlantic Way and this sowed the seed of a life-long dedication to caring for nature and for community. Keith is an ICT Engineer and Programme Manager during office hours. After years of organising litter clean-ups with community volunteer river-keeper group Dodder Action, Keith tries to network and engage all stakeholders to reduce litter and waste at the source. His home area of Greystones-Delgany and North Wicklow is enthusiastically embracing such steps in the transition towards a Conscious Community and healthy Living Planet. Keith networks and supports local schools and groups like Tidy Towns, Junior Tidy Towns, Zero Waste, Green Greystones movement, Rivers Trusts, Birdwatch Ireland, Scouts, Sports Clubs and others interested to protect our amazing local nature and hold it in trust for our children.